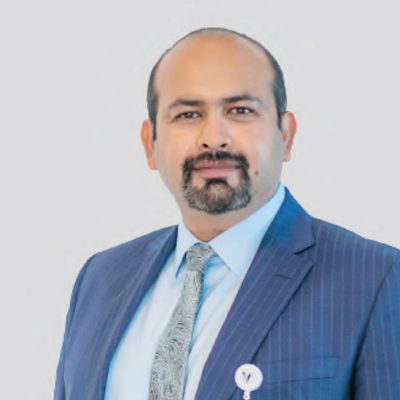 Dr. Haroon Khan
Consultant Rheumatologist
Fibromyalgia Awareness Day was started at the National Fibromyalgia Association (USA) in 1998. Since then millions of people have embraced May 12th as a day to share with others what it is like to live with fibromyalgia.
Fibromyalgia is a medical condition characterized by chronic widespread pain and a heightened pain response to pressure, excessive fatigue & cognitive di culties. It is also known as an invisible illness because it doesn’t a ect the organs in the body, can’t be revealed with x-rays, blood tests and isn’t life-threatening.
It often co-exists with other conditions like Irritable bowel syndrome, Chronic fatigue syndrome Anxiety, Depression. To other people, those a ected by the condition appear to look normal as the symptoms don’t show themselves in a visual way. For those living day to day with chronic pain though, it can cause them discomfort and can be very debilitating.
The symbol of Fibromyalgia is associated a butterfly. This portrays that, although a butterfly is light and weightless it could still cause pain if it landed on someone with the condition due to their heightened sensitivity to pain and pressure. Fibromyalgia is a diagnosis of exclusion and should only be made by trained specialists after ruling out other mimicking conditions. Here at Valiant Clinic, we aim to diagnose and manage Fibromyalgia with a holistic approach professionally in a relaxing environment.