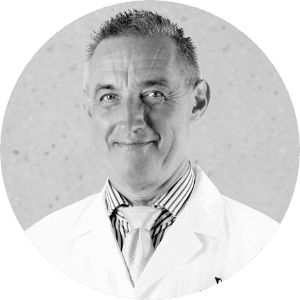 Prof. Milan is the orthopedic surgeon with more than 35-years practice in orthopedics and traumatology for patients of all ages. He graduated from the most historic University in Europe, Charles University in Prague, Czech Republic. He has been working at, the leading Orthopedic Clinic of University Hospital Motol as the Deputy Head of the clinic since 2008, performing routinely around 400 surgeries per year.

In 2015 Prof Milan moved to Dubai Bone and Joint Center in DHCC, Dubai where he performed a full range of orthopedic surgeries. He subsequently joined King’s College Hospital London in Dubai in April 2019 where he continued his practice.

His main interest is on Total Joint Replacements (Hip, Knee, Ankle, and Shoulder), Arthroscopies (Knee, Ankle and other joints), Osteotomies, both children and adult Traumatology (osteosynthesis).

Prof. Milan is also part of the medical team of Czech Olympic Committee and for Czech National Teams (ice-hockey, football, wrestling and others).

Member of the Medical board of Czech Olympic Committee

Member of the Czech Society for Orthopedics and Traumatology

Member of the Czech Medical Association of J.E. Purkynje (CzMA)